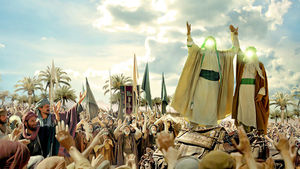 Event of Ghadir Khumm
The Farewell Pilgrimage
Ten years after the migration (hijrah), the Messenger of Allah [peace and blessings be upon him and his Progeny] ordered to his close followers to call all the people in different places to join him in his last pilgrimage. On this pilgrimage he taught them how to perform the pilgrimage in a correct and unified form.
This was first time that the Muslims with this magnitude gathered in one place in the presence of their leader, the Messenger of Allah [s]. On his way to Makkah, more than seventy thousand people followed Prophet [s]. On the fourth day of Dhu’l-Hijjah more than one hundred thousand Muslims had entered Makkah.

Location
After completing his last pilgrimage (Hajjatul-Wada’), Prophet [s] was leaving Makkah toward Madinah, where he and the crowd of people reached a place called Ghadir Khumm (which is close to today’s al-Juhfah).  It was a place where people from different provinces used to greet each other before taking different routes for their homes.

Revelation of Qur’anic Verse 5:67
In this place, the following verse of the Qur’an was revealed:
“O Apostle! Deliver what has been sent down to you from your Lord; and if you don’t do it, you have not delivered His message (at all); and Allah will protect you from the people …” (Qur’an 5:67)
The last sentence in the above verse indicates that the Prophet [s] was mindful of the reaction of his people in delivering that message but Allah informs him not to worry, for He will protect His Messenger from people.