Hussain was a man of integrity and honour.

Despite cultural expectations of him as a ‘prince’ of his tribe and a prominent figure in the Islamic Empire, Hussain would shun the grandeur of his status in favour of breaking bread with the poor and needy. He broke all cultural moulds, brought people together and helped where he could.

Not long after the passing of Muhammad, the leadership of the vast Islamic Empire had fallen into the hands of the corrupt. The good values that Muhammad had spent his life instilling into society was slowly eradicated as the new ruler, Yazid, from the Ummayad dynasty was determined to gain complete control. 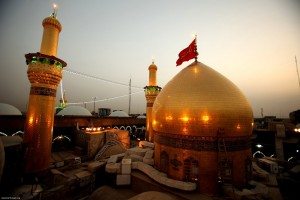 Hussain ibn Ali is buried in Karbala where a shrine has been built over his place of burial.

Hussain made a stand for social justice.

Hussain witnessed the basic rights and dignity of his people being violated, and good values from his society being drained. Yazid ruled with an iron fist, and demanded Hussain pay him allegiance to lend credibility to his own rule.

Hussain had to make a decision… Should he give his oath of allegiance to a tyrant – and stand aside as the people were being oppressed? Or make a stand and risk his own life? The timeless words of his grandfather Muhammad echoed in his heart, and Hussain knew what he had to do:

“The greatest stand is to speak the word of truth in the face of a tyrant.”

Hussain made the ultimate sacrifice.

Hussain chose to stand against Yazid and was forced to leave his home city under the threat of assassination. Alongwith his family and companions, Hussain made his way towards the East seeking to gain support for his uprising and avoid any violence. It was on this journey Hussain, his family and companions were forced to stop by an army of over 30,000, on the hot plains of a land called Karbala.

In 680 AD, after three days of no water and food in the scorching heat, Hussain stood and fell valiantly to defend those around him being oppressed and whilst standing for his principles. What makes Hussain’s stand extraordinary is that he chose to stand against a mammoth army despite having only 72 companions with him. Read more of the story here.

“Death with dignity is better than a life of humiliation.”

Through this tragic end but heroic act of sacrifice, Hussain was ultimately victorious. His death became the catalyst for revolutionary change and led to the collapse of Yazid’s tyrannic rule. Hussain stood by his principles till the very end, and his legacy continues to inspire millions around the world.

From civil rights leaders to volunteers at local charities – people across the world are inspired by his selflessness, courage and determination. The story of Hussain ibn Ali stands as an inspiration to all, no matter what colour or creed. Powered by WordPress | Designed by azarweb.net
© Copyright 2020, All Rights Reserved